What I Can’t Say

There are words and feelings I have constantly, constantly struggled to verbalize to my boyfriend. Mostly because I do not think he understands. So, I’m laying them out here. I don’t expect this to be read. I had a nightmare every night over the last three or four nights, presumably from stress. This is an attempt to lighten my mind.

END_OF_DOCUMENT_TOKEN_TO_BE_REPLACED

I Am A Terrible Friend

Friends are supposed to be happy for each other, not jealous for what the other has.

I am always happy for my friends when good things happen to them. But I can’t lie. I’m jealous of them too.

My friends, who have wonderful spouses who stick by them, who make them part of their family (married or not), who keep their spirits high, who smile for them.

And I will never have that.

Once upon a time, we had “too much history”. Now, the reaction to anything is to break up. While I blame myself for being naive, I couldn’t have imagined every supposedly loving thing he ever said was a lie.

I made the mistake of mentioning I was invited to an NYE party and wanted to go. The party was never a certain thing, and it ultimately seems it’s not happening, so I’m not going. But the mere possibility had me banned from his home for an unspecified amount of time because – as he always says – he and they “aren’t taking any chances”.

Despite he took a chance when we to an airBNB in April, and he smoked with the hosts.

Despite I went to the beach twice and attended a neighborhood fireworks party for July 4th.

Despite I stayed four days a week ago.

Despite I’ve been exposed all year due to my job, though he believes my job requiring masks negates the numerous (over a thousand) employees kept in the building at any given time… and that multiple locations, mine included, have had multiple outbreaks. My job is also not clean and I touch countless filthy surfaces and items. And there was a four hundred employee outbreak I was never aware of.

But masks mean that outbreak, and me having no idea who or what I’ve been exposed to, doesn’t terrify him (despite it still happened?).

It’s extremely interesting to me I care only about myself in his eyes after I spent money to travel to be with him, and for food, and for a few gifts (one of which was expensive). I wouldn’t have done that if I could’ve foreseen this.

I vented to a friend, who agreed about the party, but disagreed the freaking out was justified.

I tested negative twice, I never intended to visit him if the party happened anyway (something I had to yell multiple times, and he still didn’t hear until I spelled it out for him), and I planned to get tested after the party if I went. Although, he’s made it clear a negative test means nothing to him. My being is still to be feared.

Unless I’m spending money on him, it seems.

His only response is “everyone is struggling”. This seems to be the equivalent of “crabs in a bucket”. He and everyone he knows is miserable, so no one is else is supposed to try to do anything to stave off depression?

Ironically, this is the person who tries to convince me I shouldn’t take my life and it’s worth living. Seems he finally shut up about that.

He also once complained I make him out to be “the bad guy” to my friends when I vent to them. Interestingly, my friends have never ostracized him like he had his family do to me for something that hasn’t happened. Oh, and one of his siblings stole money from me.

I thought he came to the hospital after the bus collision because I was wrong about him not caring. No, he came only because the hospital mandates masks.

I’m now, in his eyes, the same as his worst ex.

His worst ex assaulted him, and caused him a nervous breakdown that resulted in him staying in a mental ward.

I wonder if I was the same as his worst ex when I came for Thanksgiving after testing negative twice. 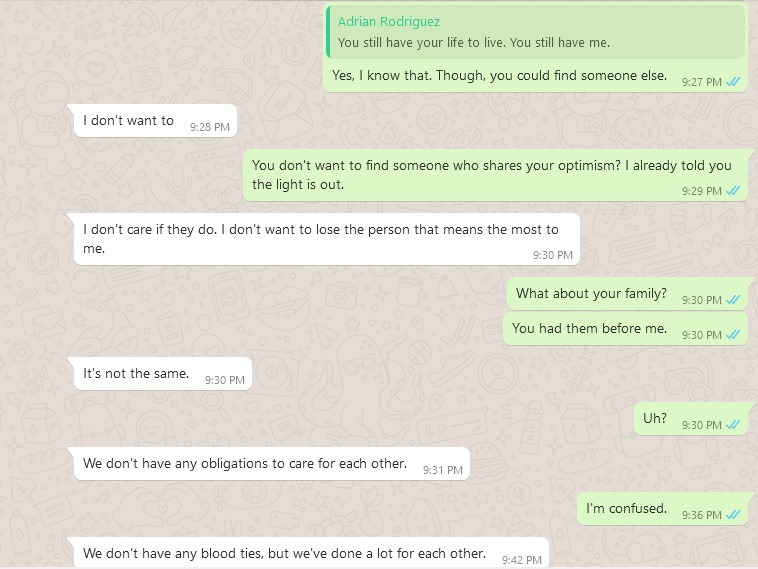 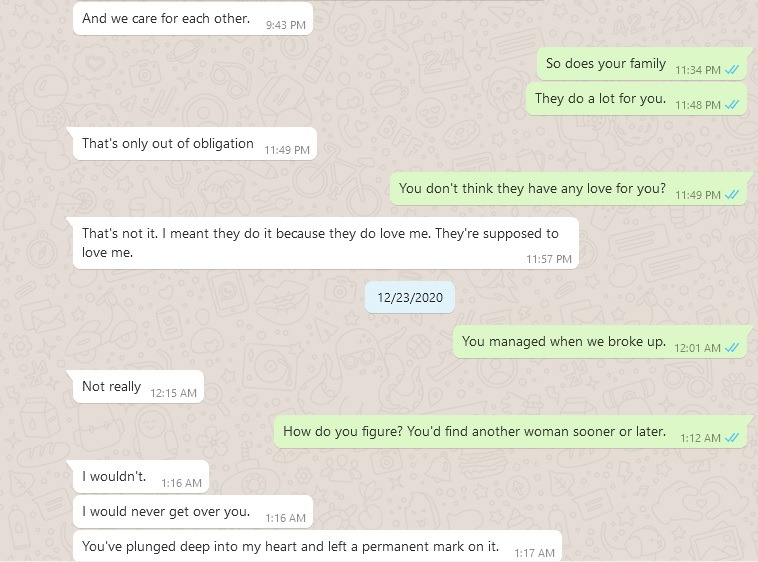 Note the date: December 23rd. A week ago. How quickly things change.

But maybe the following image is less surprising. Things can change in years. 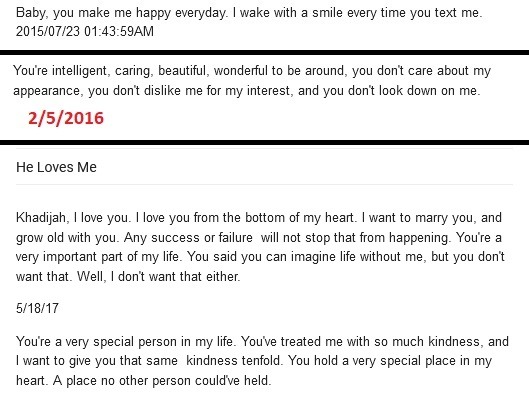 Text messages I kept in an email draft to remember. The headline of one is “he loves me”.

I think this year took the love with it.

To my friends, though they don’t read my blog, I do apologize for my feelings of envy. I wish them nothing but long and happy lives with their spouses. They absolutely deserve their spouses, and their spouses, for being the amazing partners they are, deserve them.

Please never stop caring for each other. I am always happy for you.

As your friend, always.

I looked back at my New Year’s Day post for 2020. Even then, I considered hoping for a good year was too much to ask for, but I had no idea just how right I would be.

I read back on my post from seven years ago where I express being happy overall I didn’t take my life. How naive of me. Absolutely everything I listed at that time became meaningless over the years. I claimed to be much better. If only I could’ve foreseen I would be so much worse.

I admire those who can continue hoping when they’re repeatedly let down, but I can’t. The only time I haven’t been let down is when I stop hoping and expect the worst. I can’t name a time I was optimistic and didn’t have it crushed. I truly can’t.

So many people would call it a “negative” point of view, but is being realistic really negative? Is it really negative to recognize when hope continually falls flat and the near future really is grim? Does absolutely everything really have a silver lining? Or do some things really suck and there is nothing more than to it than things are simply that awful?

I vote for the latter.

I mentioned in two previous posts I no longer want to be in this world. Sadly, I recently learned the method I chose for that exit has a high survival rate. So, I must either remain stuck or find access to something with a higher success rate.

Even in hoping for death, my hopes are dashed.

I truly believed 2020 could be an okay year at the very least. I don’t believe 2021 can be less than horrible. The only thing that will make it good is if it I don’t live to see it through. Tragically, unless I access a more guaranteed method to leave, it seems I will.

The only reason I have to remain alive is… to watch my DuoLingo streak grow. That isn’t really worth it.

It’s amazing one can have a partner and still feel lonely.

Maybe the nostalgia isn’t completely dead. Okay, for my school days, it is, but I’m starting to feel there is one thing that could make me want to relive high school: my friends.

Recently, one of my friends – or, I suppose, former friend now – cut contact with me entirely. I will never know why. The last he told me, he wasn’t well and wanted to be alone. I apologized, as that was the first time he mentioned it, wished him well, and said I hope he feels better soon. He thanked me for it.

A day later, I was blocked. Ouch.

Obviously, I’m not entitled to anyone’s friendship, so it’s absolutely his right to no longer be friends with me. But knowing that doesn’t stop me from wishing I knew why.

I hated high school with a passion that rivals the sun’s fire. But I miss walking home with my best friend every day. I miss my friends and I getting together during lunchtime in the courtyard. I miss when we would play in the leaves while we waited outside during fire drills (two students were suspended for that; we still did it).

It’s no wonder “best friends forever” is aimed at teenagers. Most friendships can’t stand that test of time.

It’s life, I know. It happens. It also makes me understand people who seemingly can’t be single. Loneliness can kill people. I’m not afraid to be alone, and at times, I prefer it, but contrary to belief perpetuated by the internet, being introverted doesn’t stop me from wanting time with my friends. But most have little time, as do I, I recently lost one, and some no longer live in the same state. That leaves my boyfriend as the most free one. Much as I love him, I still miss my friends.

When I told my boyfriend I’m unsure I want to live beyond Dec 31st of this year, or beyond my next birthday if I live beyond the former date, he insisted he would see to it I live a long life. The implications of that aside, I really can’t help wondering what this obsession is with having a long life. Even as a teenager, I didn’t see the point, but with the future absent of light, I’m more confused at 26 than I was at 16. I mentioned in a previous post I think I’ll always struggle with depressive feelings, and I certainly don’t want to fight that struggle for the next fifty years. That’s not “brave” to me. As I said in my last post, I’m simply stuck. I’m not here because I want to be here. I’m here because I can’t take myself out. My existence wasn’t my choice, but I’m stuck with it until I can access a sure solution to solve it.

Only music distracts me somewhat from these feelings, but the music has to go off eventually.

December 1st of 2020. It has been a very long year that cannot end quickly enough.

Unfortunately, the one solution to that is one that’s very difficult.

I do not want to be here any longer.

There is no point. There is no light. I’ve never been someone who was fascinated by dystopian novels and societies (Isn’t that really what history is?), so I can’t share in my friends’ ideas of enjoying the ride. I want to jump off the train.

Or the train to throw me off.

Fear of pain and greater fear of any method failing is what keeps me from trying. Any method that would be nearly a guarantee is inaccessible.

My boyfriend tells me there’s nothing better after life. No one living knows that. More so, there’s nothing in life worth living every day wishing you won’t awaken to see the next.

No, cute animals don’t make up for it.

I won’t buy a calendar for 2021. Unless I somehow finally find the bravery to make an attempt to take myself out, I’m merely going through the days. And no, “choosing to live” is not brave for me. I’m not choosing to. I’m stuck. I can’t not.

I know very well of the notion suicide is selfish. Funny how “selfish” is always said when someone can’t get their way out of someone else.

Perhaps trying so hard not to be “selfish” is part of why I feel this way.

I didn’t choose to create my life. But I got it, it’s mine, and I think I should be able to end it.

“I brought you into this world and I can take you out!”

Well, why didn’t you?